11 players took part in the club handicap competition. The first four rounds used random pairings with the top four players then going through to the knockout phase.

The rules for the handicap were:

After the first four rounds Eldar Lachinov was the only player to win all his matches, and there were four players with a score of 3 out of 4 (Clive Bellinger, Mark Johnson, Ian Gooding and Javier Ruano Marco).

Friendly match against the University

FIDE ratings (in italics) or ECF grades (in normal font) have been added where players have these.

Email ThisBlogThis!Share to TwitterShare to FacebookShare to Pinterest
Labels: University of Essex

The A team lost their match against a strong Chelmsford B team - but the C team won their matches against both Chelmsford C and Chelmsford D. The A team then returned to winning ways by beating Wethersfield 3-1.

Eldar Lachinov played his first game for Colchester, picking up a good win in a very sharp Modern Benoni - Mikenas Attack (8.e5). His analysis of the game can be found below.

The C team narrowly lost their match against Galleywood Knights. They were out-graded on three of the four boards. The C team remain top of Division 3 but have played more games than the other teams in the league. Mark Johnson made his debut for the club with a draw against a higher-graded player.

Games played in the club championship, Tony Locke rapidplay and the NECL league/knockout count for points in the grand prix. Wins by default in NECL matches do count for points.

Only a few games have been played in the club championship but the early leaders are: Eldar Lachinov (group 1), Pete Smith (group 2), Nathan Barnes (group 3) and Phil Daley/Brian Remmer (group 4). The B team picked up their first win of the season against Clacton C, moving them to the top of Division 3. The way the fixture list has fallen means that this is the last league match for the B team until January.

The first round of the NECL Knockout saw both Colchester teams drawn against Division 1 sides. Unfortunately, the B team had to default against Clacton A. The A Team were outgraded on every board against Brentwood B but managed to draw the match - winning on board count to go through to the next round.

Martin Harris, in his first chess tournament as a Colchester player, led throughout and finished joint 1st. Below is his win from the 3rd round - a game with a slightly farcical finish! Annotations (apart from the !s and ?s) are by Martin.

Here is the game played on Board 3 from the recent NECL match between Colchester B and Colchester C (Brian Remmer was White and Phil Daley was Black). This was the last match to finish - if Black hadn't won then the C team would have beaten the B team.

The dates for the first round matches are:

If a player is unable to play a match on the date allocated then it is their responsibility to arrange an alternative date with their allocated opponent. If this is not possible then the tournament director will decide on the result - default one of the players or, in exceptional circumstances, default both players.

All group matches in the club championship must be completed by Wednesday 2nd April.

First match of the season

The first match of the season this year was the Division 3 game between Colchester B and Colchester C. The final result was a draw - so both teams picked up their first point of the season.

The calendar of events for the 2013/14 season is now available.

The first event is the Colchester B v Colchester C match on Wednesday 2nd October.

The North Essex Rapidplay Championship is being held at Writtle Chess Club on Saturday 21st September.  Anyone interested in playing should register as soon as possible - a copy of the entry form can be found here.
No comments:

Adam Taylor is currently playing in the British Championship. The position below is taken from Adam's round seven game against Amy Hoare. The game has been fairly even but Adam (white) is looking for more than a draw. What was Adam's best option here to improve his winning chances? 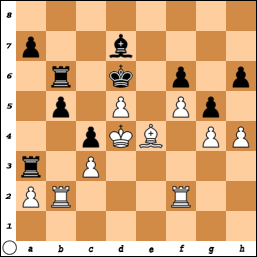 Answer can be found in the comments for this post.

Later on in the same game, Adam's plan has been successful and he now has a winning position. There are several good moves to choose from in the diagram below - what move leads to the simplest win? Answer, again, in the comments. 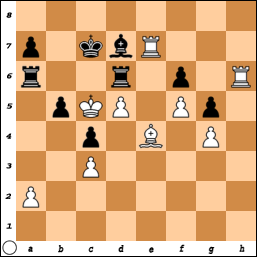 Ten players took part in the Summer Rapidplay (rules for the competition can be found here). The first round of matches all finished 2-0 with Clive, Nathan, Ed, Dave Chatfield and Juan beating Phil, Dave Wood, Pete, Roger and Mark respectively.

The second round of matches also all finished 2-0 meaning that going into the last round Dave C, Nathan and Juan were in the lead with 4 points each.

In the final round Dave C drew with Clive twice, Nathan beat Ed 2-0 (though had to rely on a swindle in the first game to avoid losing) and Phil picked up an excellent draw against our Spanish visitor (the highest rated player by a considerable margin), Juan.

The tournament used random pairings which did mean that some players had a considerably harder draw than others (Clive probably being the unluckiest) - final standings shown in the table below.

After the tournament Roger presented the winners of last season's club competitions with their trophies - Pete Smith won the Club Championship and Ed Goodman won the Club Shield.

The July 2013 ECF Grading List has been published. The grades for active Colchester players are:

There are also a number of other Colchester players - like Dimitrios Kolomvas and Mark Johnson - who have played some graded games in the last season (but not enough to have a grade yet).

There will be a quickplay competition on Wednesday July 31st - 15 minutes on the clock. All are welcome.

Pairings will be random with the first round pairings being made at 7:15. Two games will be played in each round (against the same opponent) - one with white and one with black. The aim is to have 3 rounds (6 games) with blitz games used to decide any ties.

Two new pages have been added to the site:

The NECL season ended on a high note for the Colchester team with a 4-0 win against Witham B. Witham defaulted on board 2 and there were wins for Dimitrios, Ed and John.

Below is the finish from John Duff-Cole's game on board 4. White's opening play has been a little passive and Black takes advantage with a well-executed attack on White's kingside. White has just played 18.Kh7.

The competitive season is now drawing to a close so it is time for a summary of the standard play graded games played at the club or in the NECL by Colchester Chess Club players.

Friendly match against University of Essex

Last Wednesday there was a 7-board friendly match against the University of Essex. Final score was 6-1 to Colchester, with the University's Dimitrios (also a regular player for the Colchester team) picking up the away team's win on Board 1.

Here is the game played on Board 3