The draw for round three has been made (first named player has white):

So far Mo is the only player to have played and won two matches, there are a number of players who have won one match and not played their second match yet.

Rules: 30 minutes on the clock for each player. These games should be played during November - no set date has been specified due to the number of NECL games due to be played this month - players should fit in games when they can. The draw for the 4th round will be published on the 3rd January.

The C team beat Clacton C in their most recent match, by the narrow margin of 2.5-1.5. This was the C team's first win of the season (having lost to the D team earlier in the month). The A team maintained their place at the top of Division 2 by beating Clacton B - by the same scoreline. Matt Stemp made his Colchester debut in the A team match.

Next week the A team have a match against Wethersfield and the D team are playing Maldon C.

In the first round of the knockout Colchester played their 3rd match against a Division 1 team in the last two seasons. The result was a draw (again), but this time Colchester were eliminated on board count and go into the plate competition. Mike Wagstaff won in his first match of the season; Nathan and Martin both drew against higher-graded players. Martin stepped in to play at the last minute following a player dropping out ill, allowing Colchester to avoid defaulting on one board.

The first match in the plate competition will be in the week beginning 10th November.

Colchester Junior Chess Club has had a successful start - healthy numbers of juniors attended in week one, and this increased by 50% in week two. In the first week England U16 international Adam Taylor (just back from the World Youth Chess Championship in South Africa) gave some lessons and a demonstration of blindfold chess. 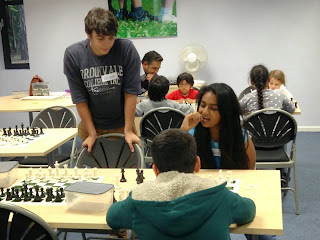 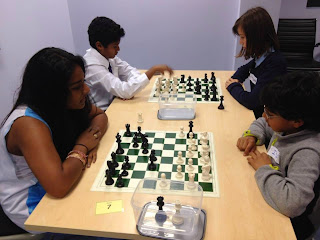 In the second Colchester match of the NECL season an upset saw the D team beat the C team. Mohammud Jaufarally and Shazia Jaufarally both beat higher-graded opponents on their debuts for the club, Mark Johnson won a neat endgame against Martin Harris and Ed Goodman defended well against Clive Bellinger but Clive won material in the endgame and was able to convert - getting the C team on the scoreboard.

The next match is the first round of the knockout competition - Colchester A will be aiming to beat a division 1 team for the second season in a row.

The NECL season has started with a win, and a loss, for Colchester teams - the newly-promoted B team had a match against the A team. The A team won 4-0, though the individual matches were mostly closer than the overall score line suggests. Svein Kjenner made his competitive debut for the club, with a win against Brian Remmer.

Not all the fixtures for the season are set yet, but the next match will see Colchester C play the newly-formed Colchester D team.