Games played in the club championship, Tony Locke rapidplay and the NECL league/knockout count for points in the grand prix. Where points are equal percentage score and then number of games played are used as tie-breakers. This month the top two have swapped places and Svein is the month's big gainer - moving up to 3rd.

Only one game has been played in the seeding round of the club championship (a draw between Dave Chatfield and Brian Remmer). In the Tony Locke Rapidplay Nathan Barnes is the only player on 3/3 - though Svein Kjenner is on 2/2 and there are a number of players who have won their first game but not yet played their second and third games yet.

It is still early in the NECL season with some teams having only played one or two matches so far. In Division 2, Colchester A are in 1st place having won their first three matches and drawn their fourth. Colchester B are in 5th place having only played two games (losing to the A team and beating Dunmow). In Division 3, Colchester D are in 1st place after winning their first three matches; Colchester C are in 5th place winning one match and losing one (to the D team).

This week the B team beat Dunmow (3.5-0.5). Svein Kjenner won a pawn in the opening and was always in control on board 4 to continue his good start in his first NECL season. Mike Wagstaff also won a pawn early on and held onto his advantage throughout. Nathan Barnes probably should have lost but instead maintained his 100% record in the league - winning a queen and pawn endgame after surviving middlegame pressure. Aleksander Orava agreed a draw, after a fairly quiet Sicilian opening, when the team win was in the bag after the wins on boards 3 and 4.

There are only two matches in December - Colchester D play CRGS in Division 3 and Colchester A play Wethersfield for the second time this season (in the 2nd round of the plate competition).

The position below is taken from the game Barnes, N - Burrows, J (Bury St Edmunds Chess Congress). White has an extra piece but Black has two additional pawns. Should White play 34.Qd8+ to force the exchange of queens? Answer in the comments. 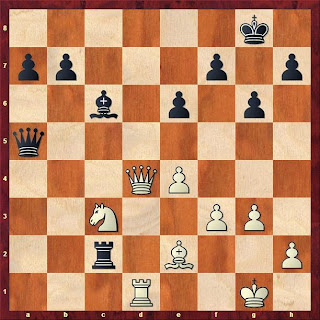