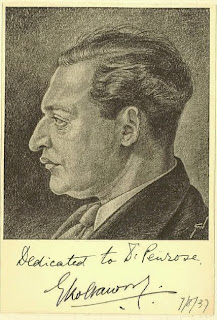 Georges Koltanowski was a Belgian (later American) chess player who was one of the top European players in the 1930s.

He was a regular in the top tournaments and had many big-name scalps. Below is a game from the 1936/37 Hastings tournament where he drew with (and probably should have beaten) the eventual winner, former (and future) world champion, Alexander Alekhine.

So why is there a game from Georges Koltanowski on a website about Colchester Chess Club?

While Koltanowski (often called Kolty) was a very strong player, he was most famous for his incredible feats of blindfold chess. Georges Koltanowski set a world record on 20th September 1937, in a 34-game simultaneous match in Edinburgh, when playing blindfolded he won 24 games and lost 10, over a period of 13 hours. This remained the world record until November 2011. He also set another blindfold record in 1960 when be played 56 consecutive blindfolded 10-second per move games - winning 50 of them.

As part of a tour of the UK, Kolty visited Colchester Chess Club On the 24th March 1937 and gave a blindfold simultaneous display. He played 6 games - winning five (against Dr L S Penrose, Dr R C Turnbull, Councillor A H Cross, Mr R Garside and Mr E Dowsett) and drawing one (against Mr B Grey). After the simultaneous display he gave a short lecture containing anecdotes about his career and chess problems. The write-up about the event mentions that he showed himself to be an expert in the Colle system - he later wrote a book about this opening which he often used against amateur opponents (but rarely against strong players).

Kolty returned to give a second blindfold simultaneous display at Colchester Chess Club on the 29th January 1938. This time he played eight games - seven wins (against Cross, Turnbull, Stanley & Grey, Penrose & Krumpach, Hucklesby, Simmons, Garside & Sainsbury) and one loss (Rossiter & Spurge - playing together). After the simultaneous match he gave a short lecture about the Colle system - perhaps a specific request following his previous visit.

The signed picture of Kolty, above, was dedicated to Lionel Penrose (the match secretary at the club at that time).

Many of Kolty's relatives died in the holocaust, but Kolty survived as at the start of the 2nd World War he was touring South America. The American consul in Havana saw him giving a chess exhibition and decided to give him a US visa. He stayed in America where he wrote over 19,000 chess columns for the San Francisco Chronicle over a period of 52 years, he also became president of the United States Chess Federation. Unusually for a non-world class player, he made his living from chess - giving exhibitions and writing numerous books. He died in 2000 aged 96.

Further details about Kolty's visits to Colchester can be found in the scanned historical archives on the About the Club page.

The club archive contains material going as far back as 1905 and all of this is in the process of being scanned in and will be made available online. The archive contains match reports, minutes of meetings, newspaper cuttings and much more. Included with the archive was a pamphlet from Colchester Library (circa 1938 - exact date not known) listing the chess books they had in stock. The list was written by an unknown member of the Colchester Chess Club and also includes brief descriptions of some of the books listed.

The introductory text is reproduced below:

Books can improve your game if you are willing to give them serious consideration. Chess masters have their own methods of play: their writings can be of service to you. The following list of books does not, unfortunately, contain the early classics - Ruy Lopez, Polerio, Philidor, Ponziani, Koch or Horwitz - but copies of their works together with those of many modern masters will be borrowed for you by the Public Library on request.

As well as the list of books there are comments about books written by Capablanca, Euwe, Greig, Harley, Murray, Spielmann and Tartakower.

A pdf of the pamphlet can be viewed/downloaded here.

Here is the game played on Board 1 in the recent Colchester A v Wethersfield match. An interesting (though, according to the computer, dubious) sacrifice by Black on move 19 leads to a complicated game that White fails to find the right path through. Annotations by the winner.

Matches against CRGS and Wethersfield

This week the A team beat Wethersfield (4-0) in the 3rd round of the plate competition. Matt Stemp won as a result of strong play following his speculative piece sacrifice that resulted in a dangerous position (for both players). Wethersfield defaulted on board 2. Aleksander Orava and Mike Wagstaff had fairly comfortable matches on boards 3 and 4. The semi-final of the plate competition will be in early January.

The D team remain top of Division 3 despite being beaten for the first time this season. On board 4, Shazia Jaufarally came the closest to winning - Ed and Mark were also involved in close matches - but eventually the grammar school won the match 4-0.