The contents of one of four surviving books containing historical records of Colchester Chess Club are now available online. This book covers the period 1936-1950 and contains match secretary reports, newspaper clippings, details of matches against other local clubs and more.

Links to the historical archive can be found on the About the club page, and a summary of the contents is below.

What would you do?

Here is a position reached in a league game: 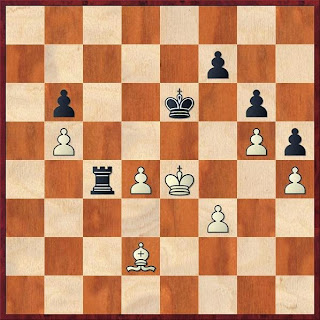 Black is a rook for bishop and pawn up, but white has a dangerous passed pawn. More importantly black has 8 mins left on his clock and white 34 mins. Black to move.

Right the clock is ticking, you have 6 mins!! Did you choose correctly?

Games have only been played in two of the seeding groups for the club championship. In group 1, Mohammud and Nathan have both won a game and the match between them will determine who comes first and second in that group. Brian Remmer has a draw and a win from his two games in group 4 - meaning, due to tie-breaks, he will finish in 1st place. 2nd place in group 4 will depend on the result of the match between Dave Chatfield and Shazia Jaufarally. In the Tony Locke Rapidplay there are a number of players who have not played all their first three games yet so the current standings are not clear. Nathan, Svein and Clive have all played more than one game and are currently unbeaten.

The draw for round four of the Tony Locke Rapidplay has been made (first named player has white):

Where previous round games have not been played both players have been given half a point for the purpose of making the 4th round draw - when the games have been played both player's scores will be updated. These half-points are shown in player scores above - so some scores could potentially go down as matches from previous rounds are played. Three players have been added to the draw this round - they are shown as having a score of 0.