The draw for round six (of seven) of the Tony Locke Rapidplay has been made (first named player has white):

Where previous round games have not been played both players have been given half a point for the purpose of making the 4th round draw - when the games have been played both player's scores will be updated. These half-points are shown in player scores above - so some scores could potentially go down as matches from previous rounds are played. The number after the player's name indicates their current (provisional) score. Matt, Simon and Denzel joined the competition at the round 4 stage.

Due to moving away from the area, four players have withdrawn from the competition (Mohammud, Shazia, Nadia, Zahra) - this means that a number of players have been given wins by default which have increased their scores.

Results on the top boards in round 5 saw Nathan Barnes beat Svein Kjenner and a draw in the match between Mark Johnson and Clive Bellinger. With two matches to go Nathan Barnes has a one point lead and a win in round 6 is likely to be enough to win the competition. However, there are still a number of other players who can win the competition if results go their way in the last two rounds - Mark Johnson, Ed Goodman, Clive Bellinger, Svein Kjenner and Martin Harris.

Here is a position reached in a league game this season: 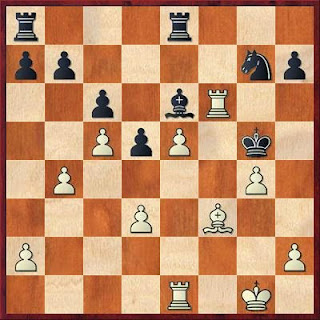 Black is a piece for two pawns up but his king is a bit exposed. Black made his move 20 minutes ago and offered a draw. You, playing White, have used this 20 minutes to calculate the various possibilities and it is now decision time.

The clock situation is that White has now got 3 minutes left for the rest of the game, Black has 30 minutes.

The team situation is that the scores are 1.5-1.5 so the result of this game will determine the result of the match. White is the higher-graded player and based on grades the match result would be expected to be in the 4-0 area.

Remember, you have had a lot of thinking time so you have as much time to calculate lines as you like - but you have only got 3 minutes left if you decide to play on!! Did you choose correctly?

The January 2015 ECF Grading List has been published. The standard play grades for active Colchester players are:

There are also a number of other Colchester players - like Javier Ruano Marco, Svein Kjenner and Matt Stemp - who have played some standard play graded games in the last half-season (but not enough to have a grade yet).

A few players have increased their grades - with Peter Harris (+7) and Nathan Barnes (+6) having the most significant increases.

The rapidplay grades for active Colchester players are:

There are also a number of other Colchester players - like Phil Daley, Clive Bellinger, Svein Kjenner, John Duff-Cole and Ed Goodman - who have played some rapidplay graded games in the last half-season (but not enough to have a grade yet).

A few players have increased their grades - with two juniors, Zahra Jaufarally (+44) and Nadia Jaufarally (+20), having the most significant increases.

A choice of three recent games to view today:

In the last month, no games have been played in the club championship. In the Tony Locke Rapidplay there are a number of players who have not played all their first four games yet so the current standings are not clear. Nathan, Svein, Clive, Mark, Nadia and Zahra have all played more than one game and are currently unbeaten.

In NECL Division 2, Colchester A are in 1st place having won three matches and drawn one. Colchester B are in 8th place (a win and two losses) - but have played the three teams currently at the top of the table. In Division 3, Colchester C are in 1st place after winning two matches, drawing two and losing one - though they have played more games than most teams; Colchester D are in 3rd place with three wins and one loss. In the NECL Plate, Colchester have reached the final where they will play Maldon B.

In the first match of the new year, Colchester had a comfortable win in the semi-final of the NECL Plate competition. Fielding what was probably the strongest team the club have put out this year there were wins on boards 2-4. Javier, playing his first match of the season, had a slightly better position in the endgame but did not have enough time on the clock to find a win (if there was one) and had to force a draw by repetition in a rook and pawn endgame.

Colchester C have played three matches this month - the first was a draw against Braintree C.

Colchester B had a very close match against Chelmsford B - one of the strongest teams in Division 2. Clive drew after a quiet game on board 3, Martin went for a material advantage of a pawn but this ended up being insufficient compensation for the positional weaknesses that resulted from this. There was an interesting game on board 1 where Alex obtained a better position but then had to play very carefully following, a probably dubious, piece sacrifice. He found a series of strong defensive moves and returned some of the material at the right time to dissipate his opponent's attack and start a decisive one of his own. Mike's game went to a rook and 3 pawn vs rook and 2 pawn endgame which was drawable but in time trouble it was not easy to find the drawing line.

Maldon C fielded a stronger team than they had in the match earlier this season against the D team. On board 1, Martin Harris played a higher-graded opponent and was probably a bit tired in his second match of the week. Simon beat Doug Mothershaw - who had beaten him in the Maldon C v Colchester D match earlier in the season. Simon again showed his predilection for sacrificing material. His knight and pawn sacrifice may have have been unsound but was difficult to play against and an error by his opponent allowed him to finish the game off. Brian got into early positional difficulties meaning he used up too much time on the clock. John Duff-Cole had a return to form, comfortably beating his opponent who turned up late and made some quick moves resulting a poor positonal start which John was able to capitalise on.

CRGS are the only team to have beaten the D team so far this season, but the C team ran out comfortable winners in their 3rd match of the month. Clive drew on board 1 against a higher graded opponent. On board 4, it was good to see Denzel Gonzales winning in his first graded match. Martin played one of his sharper openings and won with a classic sacrificial attack. Martin missed a few mating chances to win more quickly but the game was still wrapped up within 18 moves. Simon unleashed a bolt from the blue against a seemingly solid set-up against Peter Harris that completely tore the position apart. After losing his first NECL match, Simon has now won four games in a row; including all who have played 3 or more games, he is currently in 12th place in the NECL player of the season rankings (80%) - one place ahead of Mohammud Jaufarally (75%). Nathan Barnes is currenly in 1st (100%), with Aleksander Orava (88%) in joint 4th and Svein Kjenner (83%) in joint 8th. Ian Gooding and Clive Bellinger have also scored more than 60% having played 3 or more games.

The draw for round five (of seven) of the Tony Locke Rapidplay has been made (first named player has white):

Where previous round games have not been played both players have been given half a point for the purpose of making the 4th round draw - when the games have been played both player's scores will be updated. These half-points are shown in player scores above - so some scores could potentially go down as matches from previous rounds are played. The first number after the player's name indicates their current (provisional) score, the second number indicates the number of games from earlier rounds not yet completed. Matt, Simon and Denzel joined the competition at the round 4 stage.

With a number of games from earlier rounds not played yet the exact state is not totally clear. However, the top two matches involve four unbeaten players and with only two rounds to go the results of these will have a big impact on the final standings. Nathan is the only player on 100% who has played all their games, though Svein is on 100% from his three completed games. Mark and Clive have both drawn one game meaning a decisive result will move the winner of this match into contention for first place. Zahra and Nadia are currently the leading juniors having both won and drawn, both have two matches not yet completed.