The text and game below are taken from the 28th October 1919 edition of the East Anglian Daily Times. The only alterations made are those necessary to "translate" from descriptive to algebraic notation. There are errors in the comments in the game (e.g. in the note for move 33 it says that g4 would allow chances of a draw when actually it would allow a Black mate in 8 moves). Just over a year later Capablanca became world chess champion.

Senor Capablanca, the Cuban chess master, writing through the manager of his tour, says that the arrangements for the exhibition at the Town Hall, Ipswich, on Thursday evening were excellent, and that he will remember his visit with the greatest pleasure. He states that he had some very interesting games.

We append below what was stated by Senor Capablanca to be the best game played against him. The finish of the game is particularly good, but the play is of interest from the commencement:-

DITO (Disaster In The Opening)

This is the first in an occasional series of posts about openings going badly wrong in the hands of experienced players (no beginners falling for Fool's Mate here). The guilty will be named. Today's example is Lamont, R (ECF: 169) - Barnes, N (ECF: 146)(2014).

To show that nobody is safe we will start with a DITO of my own at the 2014 Bury St Edmunds congress.

This was my first chess tournament for nearly 20 years and the first day had gone well (scoring 2 out of 3 against higher-grade opposition). The morning of the 2nd day didn't go quite to plan. I had stayed overnight in Bury St Edmunds - not realising that the church bell would ring every 15 minutes throughout the night (so I knew exactly what time it was when I couldn't sleep).

I was a bit groggy at the start of the day but was pleased to see my opponent go for a line that I (thought) I knew well.

On move 3 I played c5 entering a respectable line (though not the main line) against the Advanced Variation of the Caro-Kann. 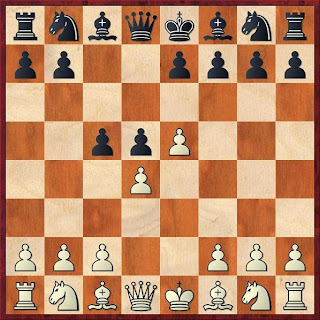 White accepted the pawn (the first person to do against me since I had started playing chess again), which is the critical response to 3...c5, and after 4...e6 played 5.Be3 protecting the pawn. 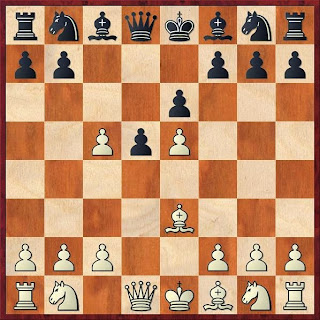 So far, so normal. However, I now couldn't remember the continuation to play. At the back of my mind something was telling me to go with 5...Nh6 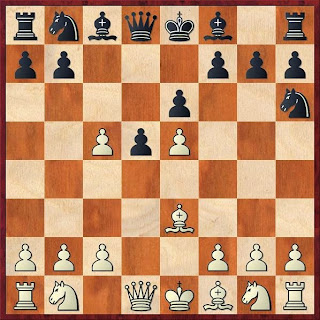 The idea is to swing the knight to f5 where it will attack the bishop on e3 and start to put pressure on White's weakened pawn structure in the centre. This is generally considered to be the best plan. But I couldn't remember if this was right or not. After a few minutes thought I was confident that I had worked out something a bit better than Nh6... 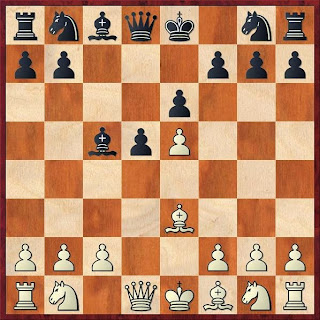 A temporary sacrifice of a bishop that will regain a pawn and leave Black with a decent position. After White captures the bishop the queen can come out with forking White's king and bishop. 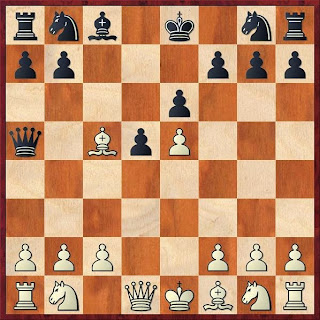 But this overlooks the obvious... 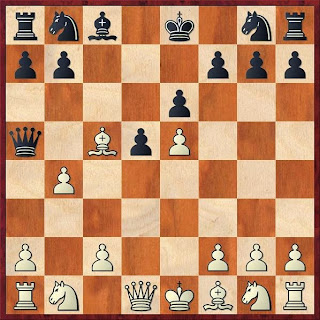 Black has lost a piece and the rest is simple for White.

There are still a few games to play in both the club championship and the Tony Locke rapidplay but recent results mean that Nathan Barnes can't be caught and has won the grand prix. There is still a lot to play for in the battle for a "podium" finish with Clive Bellinger currently in 2nd and Martin Harris currently in 3rd, but there is only 1 point separating positions 2 to 5.

The club championship has now reached the quarterfinal stage. There have been a few defaults and a few wins against seeding (Mark, Denzel and Simon have all eliminated higher-seeded players). The quarterfinal matches should be played on Wednesday 27th May.

One of the quarterfinal matches has already been played with Brian gaining revenge for last year's defeat in the Club Shield decider against Mark.

Colchester A won their last match to finish the season unbeaten in their 14 matches. They had already won division 2 but moved to 3 points clear of the B team with a 4-0 win at Chelmsford. The final league table can be seen here.

Three out of nine matches were won by the maximum score of 4-0 (including matches against the teams finishing 2nd and 4th). In the 36 individual games played in league matches there were only two losses.

Nine league matches were played by the A team, with eight wins and a draw. The player statistics (by board) are: