In Division 3, Colchester C have played five matches and are top of the table with a 100% record. They still have three matches to play but are on track to secure promotion to Division 2. Colchester D are in 2nd place but have played more games than some of the teams below them. Two wins in a row have moved them up to a score of 50%. 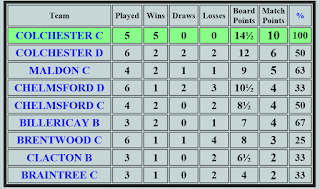 In Division 2, Colchester B have a 100% record from six matches. Their two remaining games are against the teams currently in 2nd and 3rd (Chelmsford B and Clacton A). One more win should be enough for promotion to Division 1, though the B team don't have another match until late April and if other results go their way they could already have the title wrapped-up before they play again. Last season Colchester B finished in 2nd place (behind the A team). 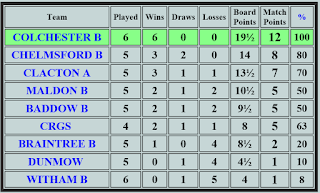 The race for 1st place is much closer in Division 1. A draw against Writtle A and a win against Writtle B mean that Colchester A are now in 2nd place, behind Writtle A. A poor first match of the season means Colchester are unlikely to win the division - though it is still possible if Writtle A and Chelmsford A drop points. Whatever the results of the remaining games, Colchester A have had a good first season back in the top division. 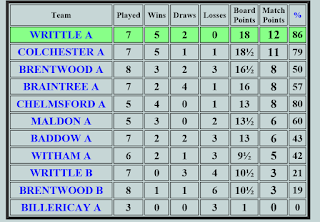