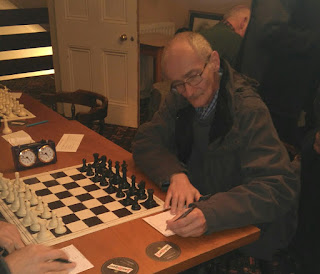 Martin Harris came to Colchester Chess Club 3 years ago at a time when the club was on a low ebb and he was a big factor in its recovery. He played for all the teams, sometimes at a moments notice. He had been known to walk miles just to get to a game, when playing he was tenacious and dogged in his approach. He also went to many congresses, including Bury St Edmunds 2013 where he came joint first in the under 120 section. This year he was named player of the year, completing 24 graded games. He also had a great sense of humour and would entertain us with jokes and games.

A valued club member and friend, he will be missed.