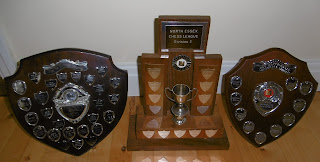 Three trophies won by Colchester this year. This brings the total to seven in the last three years, after a barren period going back to 2005.

On the left is the Al Scibor trophy - awarded to the adult player with the best performance in the NECL league. This year it was won by Norbert Voelker with a 92% score from 12 league matches. This is the 3rd year in a row that this trophy has been won by a Colchester player (Alex Orava and Eldar Lachinov in the previous two years). Svein Kjenner was 2nd in the standings (for the 2nd year in a row) with Clive Bellinger, Matt Stemp, Martin Harris, Nathan Barnes and Mike Wagstaff also doing well.

In the middle is the NECL Division 3 trophy, won by the C team, who have now been promoted to Division 2.

On the right is the Roy Heppinstall Memorial Shield awarded to the winners of NECL Division 2. The B team were the winners this year, the A team the year before. So it is the C team's turn next...