History of the NECL

A number of recent posts have contained material taken from the booklet "History of the North Essex Chess League" by J. R. Priestley. This covers the period from before the NECL was formed in the 1960s to the mid-1980s. The entire booklet can now be read and downloaded from the historical archive which is on the About the club page on this website or by clicking here. 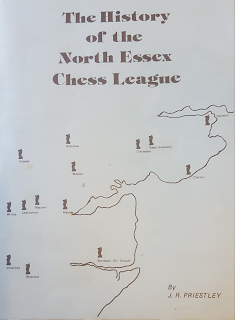 Chelmsford dominated the second division in the late 1970's and early 1980's but, as this table shows, things were rather different in 1971.


The match between Colchester and Wickford included two double defaults, which is why the aggregate of game points won and lost by the two totals 22 and not 24.
Colchester finished unbeaten for the second season in succession.
No comments:

The position below is taken from S Coughlan - I Gooding (Board 1, Witham A v Colchester A, 2017), black to play. When you put this position into the computer it spots the best move straight away but thinks that there are many other moves that are also winning. It is only when you leave it to think for a while that it realises that there is only one move to win. What is it? Answer in the comments. 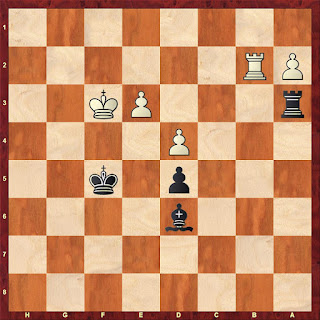 The January 2017 ECF Grading List has been published. The standard play grades for active Colchester players are:

A few players have increased their grades - with Nathan Barnes (+8), Mark Johnson (+8), Pete Smith (+7), Mo Jaufarally (+7) and Svein Kjenner (+5) having the most significant increases.