The rapid play grades for active Colchester players on the July ECF Grading List are:

A number of players appear on the list (or have non-F grades) for the first time.

The 2016/17 club championship was won by Svein Kjenner, the crucial game being his win against Nathan Barnes.

Ed Goodman won the Club Shield (for best performance by a player graded under 120).

Nathan also won the Tony Locke Rapidplay. Cross-table for the rapidplay competition is shown below. 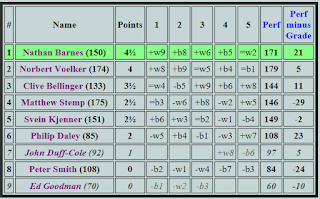